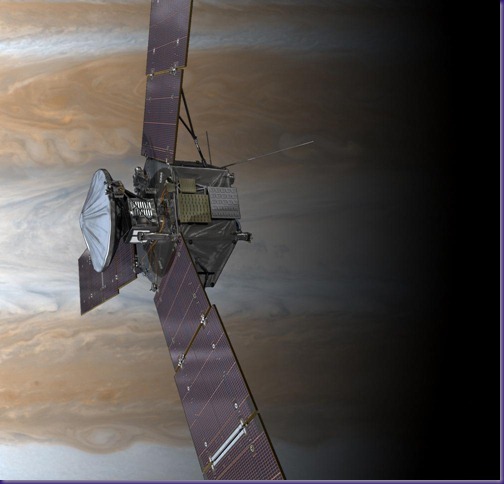 Launched on Aug. 5, 2011, the solar-powered Juno spacecraft is 294 days and 380 million miles (612 million kilometers) into its five-year, 1,905-million-mile (3,065-million-kilometer) journey to Jupiter. Once there, the spacecraft will orbit the planet's poles 33 times and use its nine instruments to image and probe beneath the gas giant's obscuring cloud cover to learn more about Jupiter's origins, structure, atmosphere and magnetosphere, and look for a potential solid planetary core. 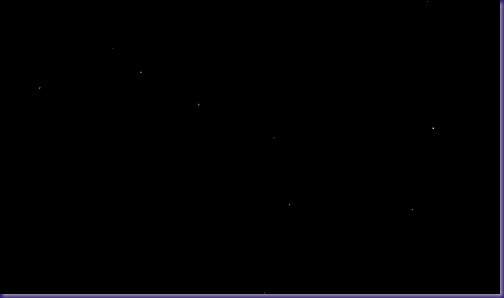 One of those instruments, JunoCam, is tasked with taking close-ups of the gas giant's atmosphere. But, with four-and-a-half years to go before photons of light from Jupiter first fill its CCD (charge-coupled device), and a desire to certify the camera in flight, Juno's mission planners took a page from their childhood and on March 21, aimed their camera at a familiar celestial landmark the Big Dipper.

Juno's name comes from Greek and Roman mythology. The god Jupiter drew a veil of clouds around himself to hide his mischief, and his wife, the goddess Juno, was able to peer through the clouds and reveal Jupiter's true nature. 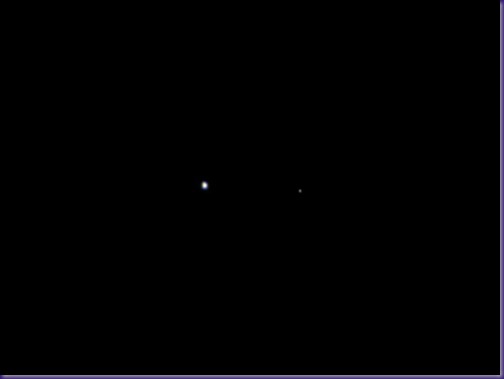 On its way to the biggest planet in the solar system -- Jupiter, NASA's Juno spacecraft took time to capture its home planet and its natural satellite -- the moon.

"This is a remarkable sight people get to see all too rarely," said Scott Bolton, Juno principal investigator from the Southwest Research Institute in San Antonio. "This view of our planet shows how Earth looks from the outside, illustrating a special perspective of our role and place in the universe. We see a humbling yet beautiful view of ourselves."  The image was taken by the spacecraft’s camera, JunoCam, on Aug. 26 when the spacecraft was about 6 million miles (9.66 million kilometers) away. The image was taken as part of the mission team’s checkout of the Juno spacecraft.

The JunoCam:
The JunoCam will capture color pictures of Jupiter's cloud tops in visible light. The JunoCam will provide a wide-angle view of Jupiter's atmosphere and poles. JunoCam is designed as an outreach full-color camera to engage the public. The public will be involved in developing the images from raw data and even helping to design which areas of Jupiter should be imaged. 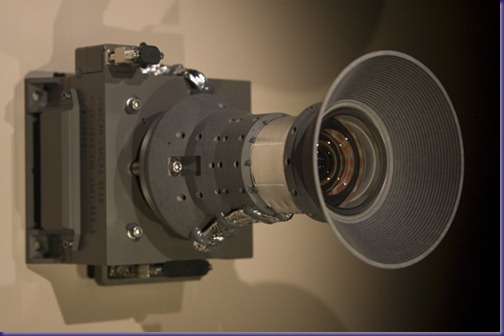 The JunoCam camera head has a lens with a 58-degree cross-scan field of view. It acquires images by sweeping out that field while the spacecraft spins to cover an along-scan field of view of 360 degrees. Lines containing dark sky are subsequently compressed to an insignificant data volume. It takes images mainly when Juno is very close to Jupiter, with a maximum resolution of up to 1 to 2 miles (2 to 3 kilometers) per pixel. The wide-angle camera will provide new views of Jupiter's atmosphere. JunoCam's hardware is based on a descent camera that was developed for NASA's Mars Science Laboratory rover. Some of its software was originally developed for NASA's Mars Odyssey and Mars Reconnaissance Orbiter spacecraft. JunoCam is provided by Malin Space Science Systems, San Diego, Calif. 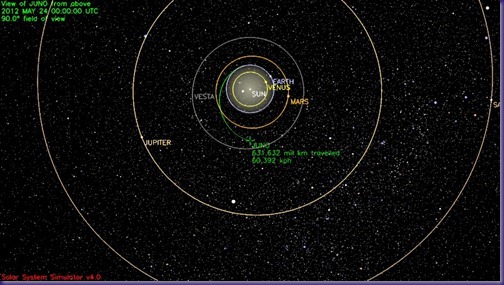 This is Juno's present course and position

Juno covered the distance from Earth to the moon (about 250,000 miles or 402,000 kilometers) in less than one day's time. It will take the spacecraft another five years and 1,740 million miles (2,800 million kilometers) to complete the journey to Jupiter. The spacecraft will orbit the planet's poles 33 times and use its eight science instruments to probe beneath the gas giant's obscuring cloud cover to learn more about its origins, structure, atmosphere and magnetosphere, and look for a potential solid planetary core.  After a year of that work it will be allowed to crash into Jupiter's surface to learn more about the planet similar to the LRO/LACROSS mission on the moon.  Except Juno will be the surveyor and excavator on Jupiter.
The Juno spacecraft is in excellent health and is operating nominally. Four instruments are turned on: the Magnetometer experiment (FGM & ASC), JEDI, MWR and Waves.

During the week of April 5-11, the Juno mission operations team completed a demonstration test of the propulsion tank heating sequence that will be used prior to the upcoming main engine firings, scheduled for Aug. 30 and Sept. 4. These engine burns are referred to as Juno’s “deep space maneuvers,” and they serve to keep the spacecraft on course for its Oct. 2013 gravity assist flyby of Earth. The recent test serves to validate plans for warming the tanks and the propellant they contain to the temperatures required for the deep space maneuvers. 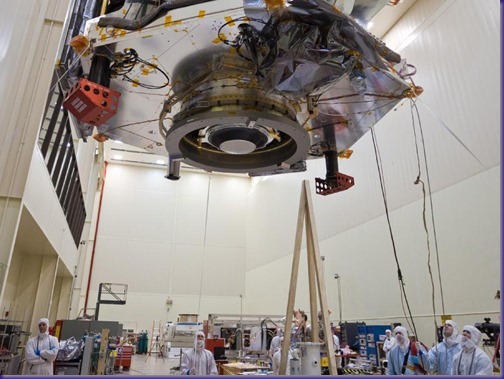 Technicians prepare NASA's Juno spacecraft for a functional test of its main engine cover. The spacecraft rests upon a dolly, which has tall legs to provide the necessary ground clearance for the engine cover to open. The cover will remain closed for most of Juno's mission, but must open for two main engine burns in 2012 that set up an Earth flyby gravity assist maneuver, and then in 2016 for the Jupiter orbit insertion burn and period reduction maneuver. 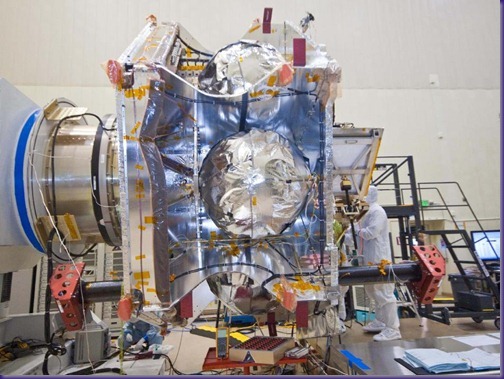 An exposed, side view of NASA's Juno spacecraft during its assembly features three of the spacecraft's spherical propellant tanks. Nearby, technicians install components that will aid with the spacecraft's guidance, navigation and control.

For weight savings and redundancy, Juno uses a dual mode propulsion subsystem, with a bi-propellant main engine and mono-propellant reaction control system thrusters. The Leros-1b main engine is a 645-Newton bi-propellant thruster using hydrazine-nitrogen tetroxide. Its engine bell is enclosed in a micrometeoroid shield that opens for engine burns. The engine is fixed to the spacecraft body firing aft and is used for major maneuvers and flushing burns. The 12 reaction control system thrusters are mounted on four rocket engine modules. They allow translation and rotation about three axes. They are also used for most trajectory correction maneuvers.

For Juno, like NASA's earlier Pioneer spacecraft, spinning makes the spacecraft's pointing extremely stable and easy to control. Just after launch, and before its solar arrays are deployed, Juno will be spun-up by rocket motors on its still-attached second-stage rocket booster. Juno's planned spin rate varies during the mission: 1 RPM for cruise, 2 RPM for science operations and 5 RPM for main engine maneuvers.

Juno is a mission of discovery and exploration that will conduct an in-depth study of Jupiter, the most massive planet in our solar system. Peering through the clouds deep into Jupiter's atmosphere, the mission will reveal fundamental processes of the formation and early evolution of our solar system. Juno's goal is to understand the origin and evolution of the gas giant planet, which will pave the way to a better understanding of our solar system and other planetary systems being discovered around other stars. 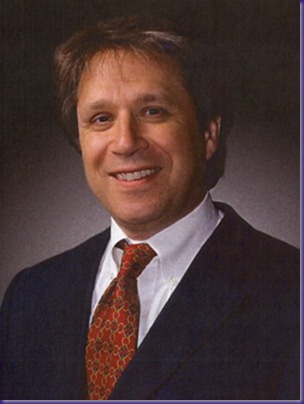 Posted by Unknown at 7:44 PM No comments: